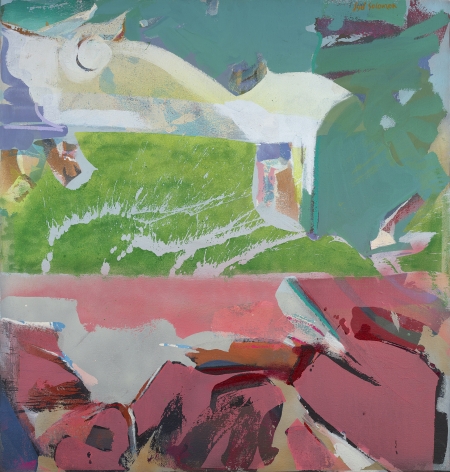 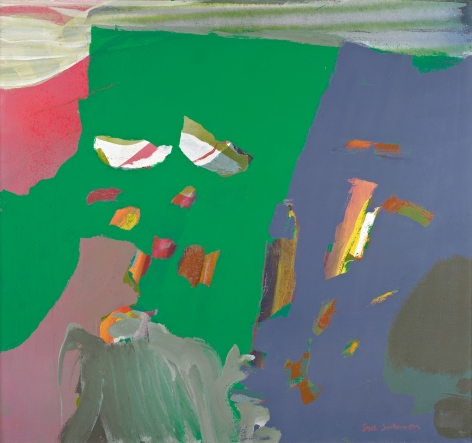 “Here, in simple English, is what Syd Solomon does: He meditates. He connects his hand and paintbrush to the deeper, quieter, more mysterious parts of his mind- and he paints pictures of what he sees and feels down there.”
-Kurt Vonnegut Jr. from Palm Sunday, 1981

Syd Solomon was born near Uniontown, Pennsylvania, in 1917. He began painting in high school in Wilkes-Barre, where he was also a star football player. After high school, he worked in advertising and took classes at the Art Institute of Chicago. Before the attack on Pearl Harbor, he joined the war effort and was assigned to the First Camouflage Battalion, the 924th Engineer Aviation Regiment of the US Army. He used his artistic skills to create camouflage instruction manuals utilized throughout the Army. He married Ann Francine Cohen in late 1941. Soon thereafter, in early 1942, the couple moved to Fort Ord in California where he was sent to camouflage the coast to protect it from possible aerial bombings. Sent overseas in 1943, Solomon did aerial reconnaissance over Holland and met English artists Barbara Hepworth, Ronald Penrose, and Henry Moore, who were also working in camouflage. Solomon was sent to Normandy early in the invasion where his camouflage designs provided protective concealment for the transport of supplies for men who had broken through the enemy line. Solomon was considered one of the best camoufleurs in the Army, receiving among other commendations, five bronze stars. Solomon often remarked that his camouflage experience during World War II influenced his ideas about abstract art. At the end of the War, he attended the École des Beaux-Arts in Paris.

Because Solomon suffered frostbite during the Battle of the Bulge, he could not live in cold climates, so he and Annie chose to settle in Sarasota, Florida, after the War. Sarasota was home to the John and Mable Ringling Museum of Art, and soon Solomon became friends with Arthur Everett “Chick” Austin, Jr., the museum’s first Director. In the late 1940s, Solomon experimented with new synthetic media, the precursors to acrylic paints provided to him by chemist Guy Pascal, who was developing them. Victor D’Amico, the first Director of Education for the Museum of Modern Art, recognized Solomon as the first artist to use acrylic paint. His early experimentation with this medium as well as other media put him at the forefront of technical innovations in his generation. He was also one of the first artists to use aerosol sprays and combined them with resists, an innovation influenced by his camouflage experience.

Solomon’s work began to be acknowledged nationally in 1952. He was included in American Watercolors, Drawings and Prints at the Metropolitan Museum of Art, New York. From 1952– 1962, Solomon’s work was discovered by the cognoscenti of the art world, including the Museum of Modern Art’s Curators, Dorothy C. Miller and Peter Selz, and the Whitney Museum of American Art’s Director, John I. H. Baur. He had his first one-man show in New York at the Associated American Artists Gallery in 1955 with “Chick” Austin, Jr. writing the essay for the exhibition. In the summer of 1955, the Solomons visited East Hampton, New York, for the first time at the invitation of fellow artist David Budd. There, Solomon met and befriended many of the artists of the New York School, including Jackson Pollock, Franz Kline, Willem de Kooning, James Brooks, Alfonso Ossorio, and Conrad Marca-Relli. By 1959, and for the next thirty-five years, the Solomons split the year between Sarasota (in the winter and spring) and the Hamptons (in the summer and fall).

In 1959, Solomon began showing regularly in New York City at the Saidenberg Gallery with collector Joseph Hirshhorn buying three paintings from Solomon’s first show. At the same time, his works entered the collections of the Whitney Museum of American Art, the Solomon R. Guggenheim Museum, and the Wadsworth Athenaeum in Hartford, Connecticut, among others. Solomon also began showing at Signa Gallery in East Hampton and at the James David Gallery in Miami run by the renowned art dealer, Dorothy Blau.

In 1961, the Guggenheim Museum’s H. H. Arnason bestowed to him the Silvermine Award at the 13th New England Annual. Additionally, Thomas Hess of ARTnews magazine chose Solomon as one of the ten outstanding painters of the year. At the suggestion of Alfred H. Barr, Jr., the Museum of Modern Art’s Director, the John and Mable Ringling Museum in Sarasota began its contemporary collection by purchasing Solomon’s painting, Silent World, 1961.

Solomon became influential in the Hamptons and in Florida during the 1960s. In late 1964, he created the Institute of Fine Art at the New College in Sarasota. He is credited with bringing many nationally known artists to Florida to teach, including Larry Rivers, Philip Guston, James Brooks, and Conrad Marca-Relli. Later Jimmy Ernst, John Chamberlain, James Rosenquist, and Robert Rauschenberg settled near Solomon in Florida. In East Hampton, the Solomon home was the epicenter of artists and writers who spent time in the Hamptons, including Alfred Leslie, Jim Dine, Ibram Lassaw, Saul Bellow, Barney Rosset, Arthur Kopit, and Harold Rosenberg. In 1966, Solomon hosted the first, and now famous, Artists vs. Writers Baseball Game in his backyard.

In 1970, Solomon, along with architect Gene Leedy, one of the founders of the Sarasota School of Architecture, built an award-winning precast concrete and glass house and studio on the Gulf of Mexico near Midnight Pass in Sarasota. Because of its siting, it functioned much like Monet’s home in Giverny, France. Open to the sky, sea, and shore with inside and outside studios, Solomon was able to fully solicit all the environmental forces that influenced his work. His friend, the art critic Harold Rosenberg, said Solomon’s best work was produced in the period he lived on the beach.

During 1974 and 1975, a retrospective exhibition of Solomon’s work was held at the New York Cultural Center and traveled to the John and Mable Ringling Museum in Sarasota. Writer Kurt Vonnegut, Jr. conducted an important interview with Solomon for the exhibition catalogue. The artist was close to many writers, including Harold Rosenberg, Joy Williams, John D. McDonald, Budd Schulberg, Elia Kazan, Betty Friedan, and Evan Hunter. He also had friends in the music world, including Mitch Miller, Eric Von Schmidt, Jerry Leiber, and Jerry Wexler. In 1990, the Ringling Museum of Art honored Solomon with a solo exhibition, A Dialogue with Nature. The artist died in Sarasota in 2004 after a ten-year struggle with Alzheimer’s Disease.

Currently, Syd Solomon: Concealed and Revealed is a traveling museum retrospective examining Solomon’s use of camouflage in World War II and how that impacted his abstract paintings. The exhibition opened at Guild Hall Museum in East Hampton and is currently on view at the Ringling Museum in Sarasota, Florida. The exhibition is accompanied by a 96-page hardcover catalogue with essays by Michael Auping, former Chief Curator of the Modern Art Museum of Fort Worth; George S. Bolge, Director, Museum of Art in Deland, Florida; Dr. Gail Levin, distinguished professor and art historian; and the artist's son Mike Solomon, an artist and consultant for artists’ estates.